Tucked under the sanctuary stairwell on Sunday mornings these days is a young man whose job is, in part, to listen and to look constantly throughout the full hour of worship!  He’s not distracted from the worship service; he is assuring that those present and those worshipping via the on-line service can see and hear the words, the music, the people and the setting. 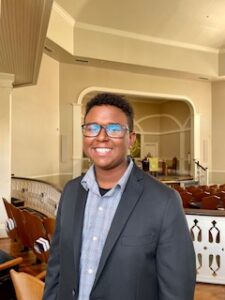 A year ago, Alex Andrews became our audio/visual technician. Members Tate and Katie O’Gwin recruited Alex, whose mother had worked with Katie in her law practice.

Alex began his journey into the AV world when he was introduced to computers. He built his own computer and started taking AV courses at school. The Coahulla High School junior was actually introduced to the AV side of technology “four or five years ago.”  Being a tech-oriented person, he saw the part-time church job as “a perfect opportunity” for him to be able to use his technical skills, enjoy being with people and attend church.

The big soundboard is expanding, and Alex is working with equipment providers and with Adam Burnette and Kathryn Sellers to improve our broadcast quality.

While Alex is enjoying his job, he says his life goal is to become an officer in the Navy and then to enter politics.  He describes himself as having a passion for politics, adding that he spends much of his free time keeping tabs on the world of politics.  He would like to start as a state representative, then run for governor of Georgia.  Who knows where he might go from there? He is already President of his Junior Class.

At some point soon, Alex hopes to train some of our members on how to operate the system so he can take an occasional Sunday or two off for vacation.  Interested persons may apply under the stairwell before or after the Sunday service.  Even if AV is not on your bucket list, stop by and get to know this very affable and bright fellow, the newest member of our church team.

And, even more important is his joining with us! Alex will be baptized and join the church on Sunday, November 20 by profession of faith. Be sure to be present for this great day!