A View from the Wilderness

My déjà vu always wakes up with the change of seasons—especially in the Fall. I know it’s not Fall yet; but if feels that way once the children are in school and normal family routines have resumed. It has even been almost cool a few mornings in the past week. Soon we’ll be looking forward to some more outdoor time in pleasant weather, along with Fall colors and flavors.

The déjà vu has been somewhat unwelcome this year, however, and that’s because it has revealed the blatant truth that meets us every day as we step outdoors; the world is not as it should be. After a brief reprieve this Summer, it feels like things should be different. We shouldn’t be worried about masks or vaccines or variants anymore. Masks should not be on the litany of things we have to remember as we head out the door on the way to school in the morning. (Don’t get me wrong. I’m thrilled that our kids are wearing them now.)

It’s the same at church, too. We shouldn’t still be worried about the livestream or reconnecting with people, or getting Sunday school again. We just shouldn’t. In an ideal world, we’d be well underway, enjoying the company of friends, learning some new things, delighting in the faithfulness of a God who has led us to the other side of it all. That we’re walking the same ground we were last year makes it feel somehow worse.

We probably know by now that faith never has a straight line trajectory. The result of this is that we grow through seasons of struggle and difficulty as much as we do through the good times. That’s why scripture is full of the tension between expectation and fulfillment, barrenness and fertility, wilderness and Promised Land.

Figure 1: The Judean Wilderness, mostly barren. This is the lush part.

Let me give you two examples. Our Bible Study opened the Gospel of Luke this week, and we began by looking backwards to First Samuel. At the beginning of both books we meet older couples who are childless, waiting, and faithful (Hannah and Elkanah in First Samuel, Zechariah and Elizabeth in Luke). When God intervenes, both couples bring prophets to announce the coming of Israel’s King: Samuel, who anoints King David, and John the Baptist, who anoints Jesus. We even get remarkable songs of praise from two heroines in the different stories: Hannah, the mother of Samuel, and Mary. 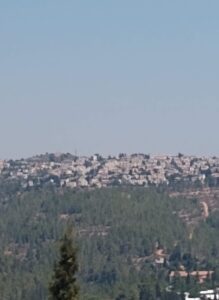 To underscore the connection between the two stories, it helps to know that you can actually see the location of the two scenes one from the other.

Samuel lived in Ramah, not too far from Jerusalem, and the traditional sight of his tomb is nearby. In Luke chapter one, when Mary comes to visit her cousin Elizabeth (and when they were pregnant with Jesus and John respectively), they were thought to do so at a place called Ein Karem, which is in view of Samuel’s tomb from some miles away.

Maybe it was an accident of history that brought the two sites within sight of each other. Or maybe it was a little bit of God’s mischief, reminding us from our own story of faith that fruitfulness often comes from seasons barrenness. We can see it with our own eyes.

Figure 2 A view of Samuel’s Tomb from Ein Karem. See if you can spot it on the hill! Apologies that it’s blurry, I am a poor photographer and I was on the run. 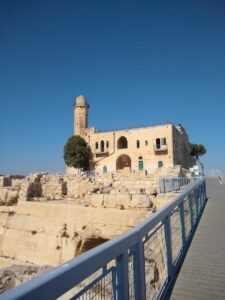 It might be hard, then, to go through another season like this, expecting something different: remembering the consolations of the past and living in the disappointment of the present. To that I can only say that all of these things—grief and joy, disappointment and hope, barrenness and abundance, wilderness and promised land—live in sight of each other. Karl Barth put it, “Just as there can be no Easter without a cross, there can be no cross without Easter.”

Figure 3 Samuel’s Tomb. Has been a Crusader church, a mosque, and is now a synagogue. Near Ramah.

If you’d like to know more, join us Monday mornings at 10:00 a.m. at the church for Bible Study.

Or, join a group on Wednesday, September 1 at 8:00 p.m. via zoom to hear a report on Will’s Holy Land trip, and how it can deepen your faith and knowledge of God’s story.

For a day in your courts is better than a thousand elsewhere.

In Luke 2, we read about the prophetess Anna who “never left the temple but worshiped there with fasting and prayer night and day” (v. 37). For her, as for the psalmist, the temple was a better place to hang out than anywhere else. I wonder if this was part of what Solomon envisioned with his grand temple complex: that those who came up to Jerusalem would never want to leave God’s house.

Have you ever spent an entire day at church or participated in an overnight vigil in God’s sanctuary? In ancient Israel, temple worship was constant. There were always priests around saying prayers, singing psalms, or making sacrificial offerings on behalf of the people. What else might you do, and see, in God’s house?

Some modern sanctuaries have become not just houses of worship but also focal points for justice in recent years. Dozens of U.S. churches, bearing banners that read “We Choose Welcome,” have become sanctuaries for migrant refugees. What might it be like to literally take refuge in God’s house today?

God, be with those who seek sanctuary today. Amen.

From “These Days, Daily Devotions for Living by Faith”

We all struggle with spiritual discouragement and lethargy.  Some days our circumstances threaten to overwhelm us, and we struggle just to pray.  Many times we just don’t feel like doing the things we know we should.  For one reason or another, God sometimes seems far off and unreachable.

David faced times like these in his life.  The Psalms are filled with verses that express his despair and feeling of abandonment.

Yet the Psalms also give us the key to living victoriously during the dark periods of life.  Let’s take a quick look at Psalm 119:89-95.

“Forever, O LORD, Your word is settled in heaven.  Your faithfulness continues throughout all generations; You established the earth, and it stands.  They stand this day according to Your ordinances…”

My circumstances or feelings have not changed God.  He is the same God today as He was when He hung the stars in the sky, led the Israelites through the Red Sea, and fed the five thousand.

“For all things are Your servants…”

All things, even the things affecting me right now, are God’s servants.  The circumstance, people, and events around me are all under God.  They are His servants, designed to help and bless me spiritually.

“If Your law had not been my delight, then I would have perished in my affliction.  I will never forget Your precepts, for by them You have revived me.  I am Yours, save me; for I have sought Your precepts.  The wicked wait for me to destroy me; I shall diligently consider Your testimonies.”

Recalling God’s faithfulness and control over everything that touches us gives us strength to walk with God even when we feel like giving up in despair.  After all, our feelings and circumstances have not changed God.  He is perfectly capable of sustaining us if we will only let Him.  We simply need to choose to delight in and diligently consider God’s precepts (His principles and character) despite how we feel.  Choosing to delight in God might not be easy.  It might even involve hard work.  But only God can revive and save our soul from spiritual lethargy.

Next time you feel spiritually drained or inadequate, remember that you have a choice.  You can wrap yourself up in excuses and self-pity, or you can choose to draw your strength from an unchanging God.

“Jesus Christ is the same yesterday and today and forever.” (Hebrews 13:8)

A new school year is upon us.  The Delta variant of Covid-19 is quickly leading us back to a time of masking, social distancing and hand washing.  Whatever happens in the coming weeks and months, it is not likely to lead us back to pre-Covid times and practices.  How should we not only deal with, but actually embrace change in our lives?  We turn this week to a devotional by Lauren Abraham as our Midweek Meditation:

Are you going through a period of life where you are dealing with change? While some of us invite change, it can be a very difficult thing for others.

Change can be exciting, such as starting a new job, making a new friend or even starting a new semester in school. However, change can also be hard when we don’t want it. So, how are we supposed to deal with the changes we face in life?

Ecclesiastes 3:1 says, “There is a time for everything, and a season for every activity under the heavens.” When we look at change this way, we can be better prepared to manage it. As Christians, we know that everything happens for a purpose, and God can work through any situation.

Additionally, when we are in the midst of difficult changes, we can find comfort in knowing that Jesus experienced pain here on Earth and knows what it is like. After all, Jesus died on the cross for our sins so that we might have eternal life with Him.

Oftentimes, when we are going through trials, we focus on the loss that is involved. However, we know that God works everything together for the good of those who believe in Him. While we might not see the purpose behind what we are experiencing now, we can trust that God has a greater plan. Jeremiah 29:11 says, “For I know the plans I have for you, declares the Lord, plans for welfare and not for evil, to give you a future and a hope.”

In the end, while change can be hard, we can grow in our faith when we learn to embrace it. When we trust God’s plan, He transforms us each and every day as His followers. So, as you experience change in the upcoming year, remember this truth.